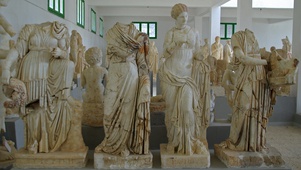 OER created at CUNY for course in history.

A class presentation as part of the discussion on West Africa about ...

A class presentation as part of the discussion on West Africa about the instructor’s Yoruba Heritage, Research, Tradition and Culture in the AFN 121 course: History of African Civilizations on April 20, 2021.

This CUNY Student Edition of Adventures of Huckleberry Finn is intended to ...

This CUNY Student Edition of Adventures of Huckleberry Finn is intended to provide a free-to-use, reliable text for students and instructors. It is published under a Creative Commons license which allows almost unlimited free-use. The text is based on the first American edition of Adventures of Huckleberry Finn, published in 1885. CUNY student editions are created and maintained by a community of student-scholars. Join them on GitHub: https://github.com/CUNY-Student-Editions

This syllabus reflects having students do self-guided research over a semester that ...

This syllabus reflects having students do self-guided research over a semester that doesn't require textbooks.

Unrestricted Use
CC BY
American Education Through Films and Documentaries
Rating

A social foundation of education

This course is an introduction to American Studies through the questions of ...

This course is an introduction to American Studies through the questions of identity. How are our identities formed and how do they function? What does it mean to be “American,” who claims this identity, and on what terms? How do American identities shape—and how are they shaped by—factors such as class, race, ethnicity, gender, language, nation, and sexuality?

This semester, we will examine diverse American identities, with an emphasis on the social and cultural forces that mold them. We will explore the structural differences that divide individuals and groups, and ways that people challenge or transcend these divisions. This interdisciplinary course integrates materials from literary studies, history, ethnic and gender studies, and sociology. We will read some academic theories about identity, but will more often read what a wide range of Americans have written about their own individual and collective identities.

The aim is to help you better understand your own and other people’s identities, the languages and conventions that writers use to analyze identities, and how varied perspectives on identity in the United States and the Americas speak to—and at times against—one another. Rather than settle on a final definition of either “America” or “identity,” we will explore both as products of on-going dialogue, debate, and change.

This collection of stories was written by Dakota Sioux author Zitkala-Sa, also ...

This collection of stories was written by Dakota Sioux author Zitkala-Sa, also known as Gertrude Bonnin. Helen Keller sent a testimonial letter to the author on August 25, 1919: "I thank you for your book on Indian legends. I have read them with exquisite pleasure. Like all folk tales they mirror the child life of the world. There is in them a note of wild, strange music." The text here presented was published in 1921 by Hayworth Publishing in Washington, D.C.

Unrestricted Use
CC BY
American Pluralism to 1877: A Resource Guide
Rating

This resource collocates open resources in American History to 1877, and organizes ...

This resource collocates open resources in American History to 1877, and organizes them by theme for all faculty teaching this course. It also provides students with links to books, essays, newspaper and journal databases offered at CUNY. Supplementing this material are images, audio and videos related to the period.
The guide is available at http://libguides.brooklyn.cuny.edu/americanpluralism/
The XML file is available for download above.

Unrestricted Use
CC BY
Ancient Medicine: The Classical Roots of the Medical Humanities
Rating

This site is for those interested in ancient medicine and the medical ...

This site is for those interested in ancient medicine and the medical humanities, both at Brooklyn College and around the world.
The medical humanities is a multidisciplinary field that embraces the study of medicine through the lenses of literature, history, philosophy, the social sciences, and the arts in the context of applied medicine and medical ethics. It draws upon these diverse disciplines in pursuit of medical educational goals, and in its continued valuation of liberal education supports classical ideals of critical analysis and the importance of cultural awareness in the sickness and health of society and the individual.
The guide is available at http://libguides.brooklyn.cuny.edu/ancientmedicine_goyette.
The XML file is available for download above.

The assignment helps students individually build a usable, expanding vocabulary of terms and concepts, enabling each to further contribute to the ongoing, evolving written, oral, and visual conversations centered on the use of and thought about animals for food, clothing, work, entertainment, experimentation, imagery, and companionship.

A survey of American art.